The Horse Creek River Bridge is located on a forest service road in Valemount, BC. During inspection of the bridge, concern was raised regarding the stability of one of its abutment pile foundations, as it appeared to be exposed due to scour; the abutment piles also seemed to be leaning towards the river. Due to safety concerns, the bridge was temporarily restricted to heavy truck traffic (timber trucks). The bridge structure is composed of two steel girders supporting concrete deck panels and is founded on steel pile foundations.

A solution was needed to keep the bridge open to timber hauling trucks while its safety is monitored until rehabilitation measures are implemented to the bridge abutments.

Allnorth proposed to install tiltmeters on the bridge abutments to monitor the abutments and piles tilting, and to check whether the tilt is increasing with time or stable, thus verifying the stability of the bridge.

This project shows how the implementation of structural health monitoring ensures the safety of the bridge and keeps it operational during rehabilitation.

The tiltmeter, the data logger and the power source (batteries) are all enclosed in a single weatherproof box, which simplified their installation and operation.

Following the installation of the tiltmeters the bridge was re-opened to traffic while its performance was constantly monitored to ensure that the bridge movement was within the accepted range and not adversely affected by traffic. This monitoring is to be maintained until a permanent rehabilitation solution is implemented. 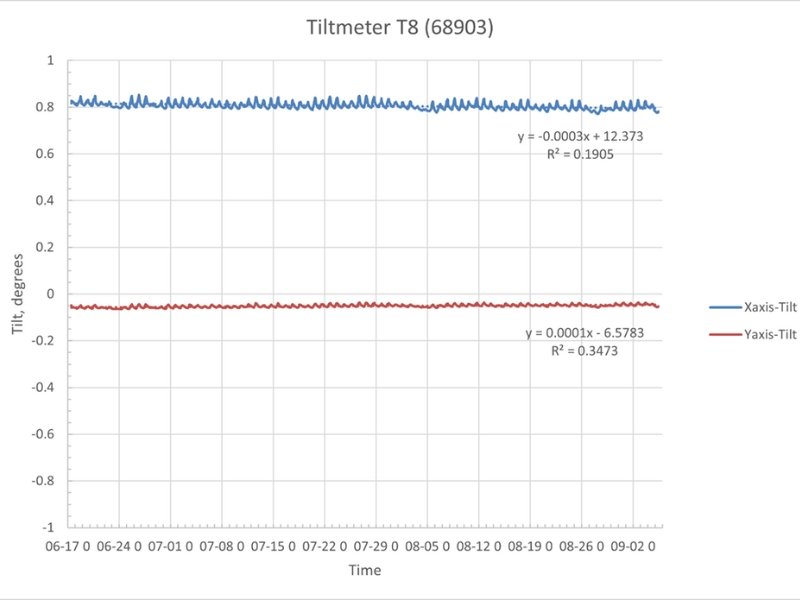